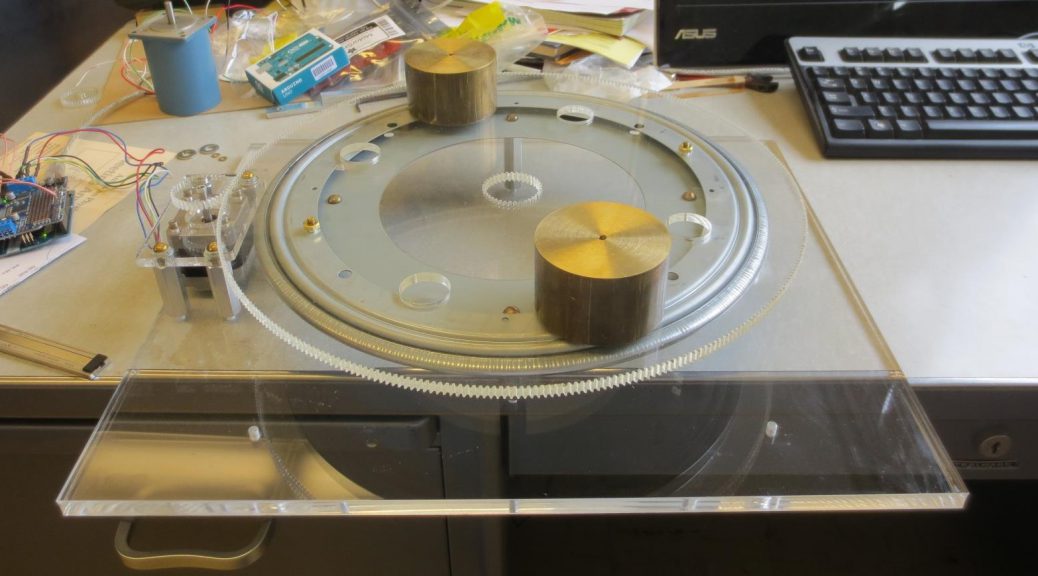 I shared an office with a postdoc, Krishna, whose work centered around building an instrument to measure seismic tilt for LIGO, the gravity-wave observatory that made the first detection of gravitational waves. The instrument consisted of a long bar with weights on each end that hung from a pair of thin flexures EDM-cut from beryllium copper, forming a beam balance. The flexure point was aligned to be as close as possible to the center of mass of the bar so that lateral displacements of the system would not cause the beam to rotate relative to the support, while tilts would. An autocollimator developed by our group allowed (A paper describing the instrument is available here.)

Because of the high moment of inertia of the balance, the low loss factor of the flexure, and the fact that air drag was negligible due to the balance being enclosed in a vacuum chamber, the quality factor, or number of cycles it took for disturbances to die out, was very high. (It was about 5000, which, when a cycle takes 90 seconds, means that a single disturbance would take nearly a week to damp out.) Our group has used electrostatic feedback with torsion balances, but that wasn’t ideal in this case. Instead, Krishna decided to pursue a gravitational feedback system, where two weights would be placed on opposite sides of a turntable partially under one end of the balance. The ideas was that by rotating the turntable, the gravitational force between one of the turntable weights and the weight on the end of the beam balance could be used to damp out any disturbance introduced into the beam balance.

Krishna had already machined the weights and bought a stepper motor, motor driver, and turntable bearing, and one day asked his fellow office mates where he could buy some gears to let the motor turn the turntable. We started talking about sources, and then I realized we could laser cut the whole thing. “We’ll have it done in 15 minutes,” I said. Charlie, the other office mate, started his stopwatch and we were off.

We grabbed a couple sheets of acrylic and sat down at the laser. I used the built-in gears feature in Inkscape to generate a turntable-sized gear and a pinion to go on the stepper motor (a multi-point star was used as the center hole in the pinion to provide a friction fit), and drew out a base plate and mounting plate for the motor.  The mounting plate had slots instead of screw holes so that the gear interference could be adjusted.

We have a saying in the lab that things always take a factor of pi longer than you expect, but despite some hiccups in moving the gear drawing from Inkscape into CorelDRAW to send to the laser, we came in under 47.12 minutes. Everything was put together with screws and aluminum standoffs. After a bit of programming, Krishna had the world’s first gravitational damping system.