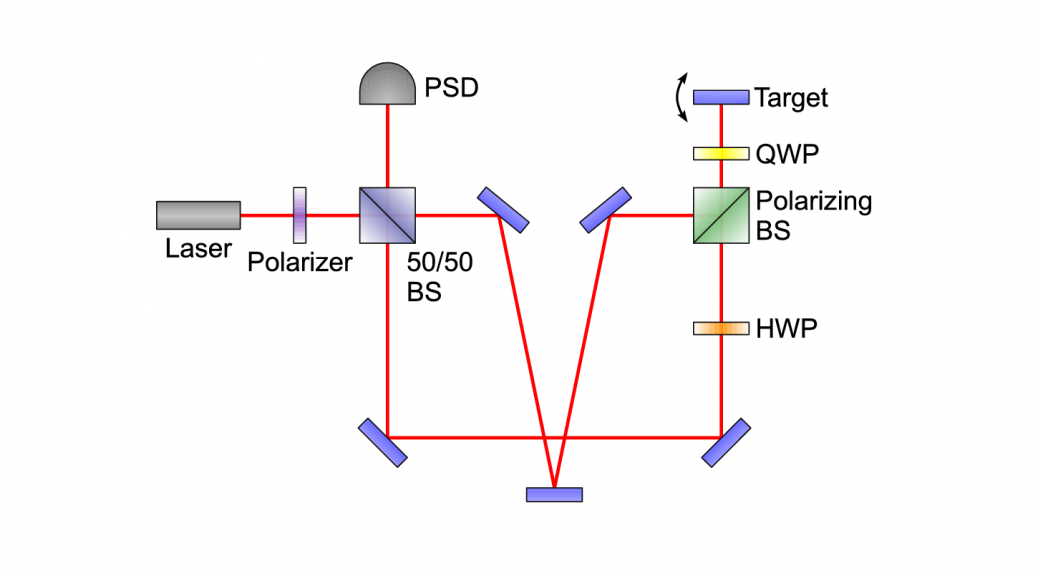 The science data for our torsion-balance experiments is collected by measuring the rotation of the pendulum using laser autocollimators. In these autocollimators, light from a laser diode is collimated by a lens, reflected off a mirror on the pendulum, refocused by the original collimating lens, and directed onto a position-sensitive photodetector by a beam splitter located between the laser diode and lens. This setup allows for a sensitivity of nanoradians/√hertz to rotation while rejecting non-rotational movement of the mirror, which is critical to accurate measurements. (The denominator in the units, read “per root Hertz” indicates that a signal of nanoradians can be resolved in a second, and that the sensitivity goes inversely with the square root of the measurement time. A nanoradian is roughly the angle subtended by a E. coli bacterium a kilometer away.)

One avenue  of improving our science results suggested a need for a system capable of resolving picoradians/√hertz—a thousand times better than our existing autocollimators. (A picoradian is roughly the angle subtended by an E. coli bacterium in San Francisco, as viewed from Seattle, or by a monitor pixel on the moon, as viewed from Earth.) I researched possible solutions and found a simple interferometric design based on a little-known quantum-mechanical effect that achieved this level of sensitivity. This design, however did not provide any rejection of non-rotational movement of the pendulum: there was no way to distinguish between rotations and other movements of the target mirror. I redesigned the device to provide for rejection of the non-rotational movements by manipulating the polarization of the laser light. The University of Washington filed for a patent on this design (US 13/426,309) and I served as the primary contact with the outside counsel who wrote and submitted the patent application. The application was approved by the patent examiner in May 2014.

An open-access preprint of the academic paper reporting on the device is available here.